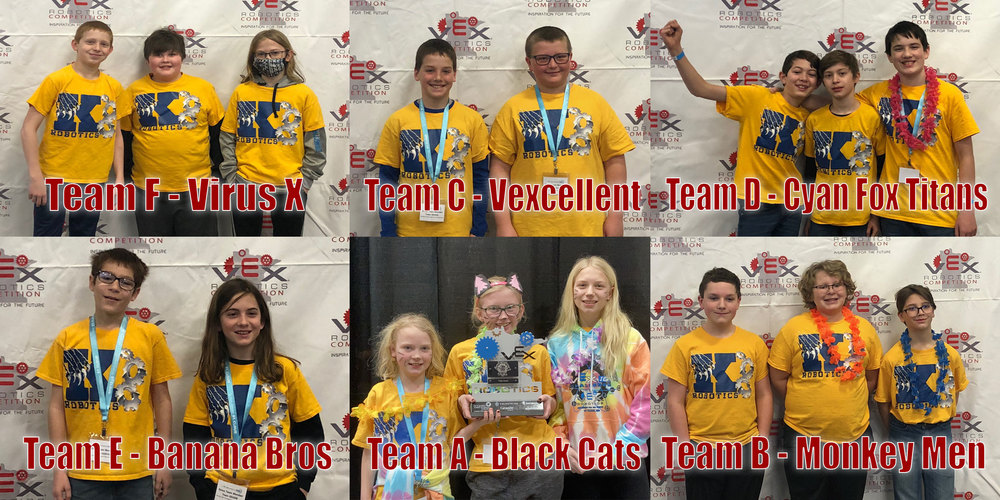 In just their third year of existence under Kimball Area Community Education, Kimball’s Vex IQ Robotics program sent all six of their 5th and 6th grade teams to the 2022 Minnesota State Championships in St. Cloud on March 5.

Coached by Mike Kunkel, Jesse Lesnau, Andrew Freeman, Myles Durga and Alyssa Mertens, all six of Kimball’s IQ teams had multiple high scores during the State competition.  Kimball was mentioned by the Mentor of the Year as a group that helped guide him. Three of the six Kimball IQ squads advanced to the final rounds and placed in the Top-10 at the State Championships.

Kimball Vex IQ was led by Team Monkey Men with an overall 5th place finish in a six-way tie.  The following two Kimball IQ Robotics teams to place were Team Vexcellent in 8th place and the Black Cats, who tabbed a 9th place finish along with the Think Award.

Kimball Vex IQ had 20 students participate in the 2021-22 season and their six teams earned multiple accolades throughout the season. Below is a recap of each team’s season awards.

“Our VEX IQ Robotic students have proven to have determination to produce a strong and durable product,” stated Coach Lesnau. “Even in adversity, we had a Kimball team drop and break their robot, but the team was able to fix their robot under pressure and have the robot ready to compete by their next match.”

“These kids have been able to hone their driving skills and maximize their point totals,” added Lesnau. “Coach Kunkel has consistently mentored these students to get the best from each team so that they compete at a high level. All of the robotics students have dedicated their time and hard work this year and will have bright futures with their work ethic. Another season comes to a close and all of our Kimball IQ teams should be proud of their achievements.”

The new Vex IQ game for the 2022-23 season will be released during the upcoming World’s Competition in May.